As the NBA regular season winds down, Charlotte Hornets Jeremy Lin made the news again, and this time, it’s not for his erratic hair style.

On April 5, 2016, a member of the Reddit’s NBA sub-reddit community cut together a video titled “Jeremy Lin: Too Flagrant Not to Call.” The video records a play involving Lin and Clipper’s Wesley Johnson, who blocked Lin as he drove up and court and hit him right on the nose, resulting in a nosebleed.  Other examples in the video includes a foul by James Harden, who smacked Lin right on his head, and a play from previously when Lin was with the Houston Rockets, where he once again was hit by Portland Trailblazer’s LeMarcus Aldridge. 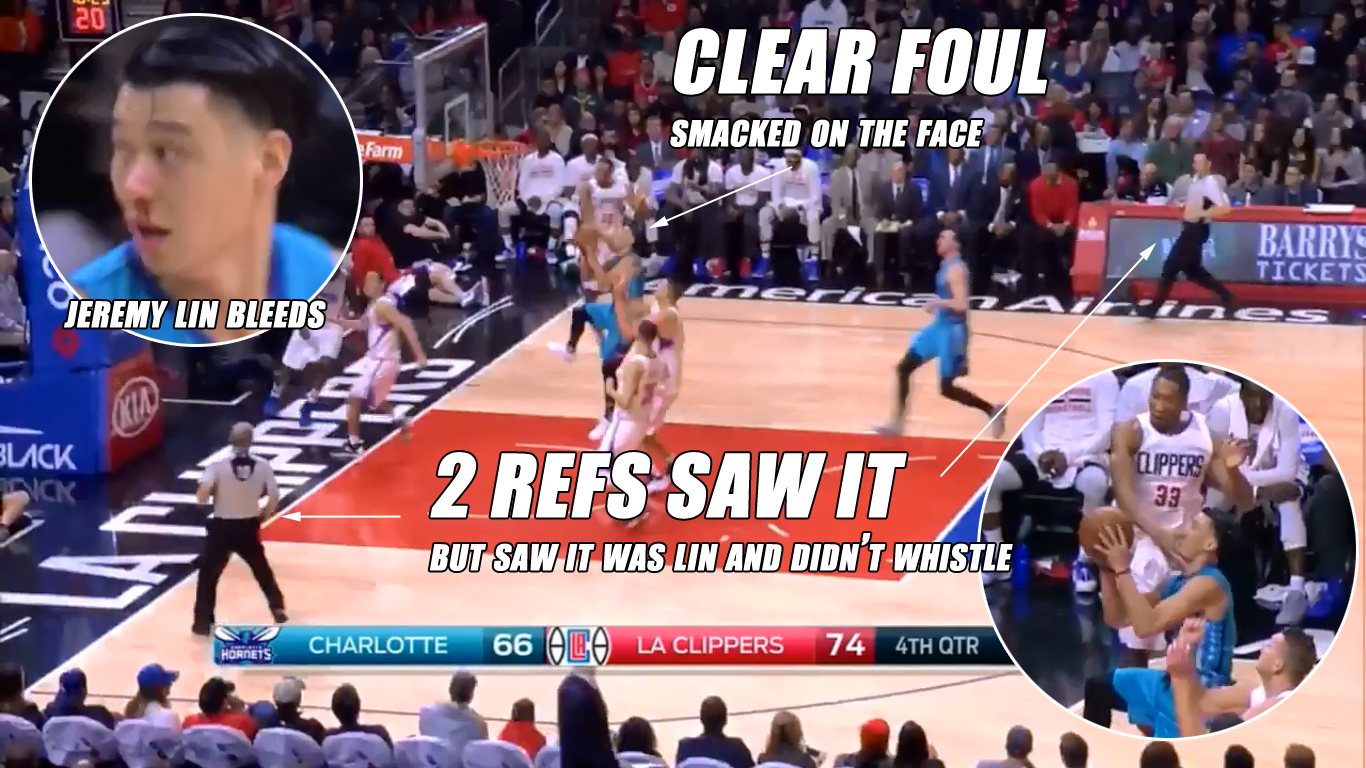 Later that week, on April 11, 2016, Jeremy Lin responded on Streamable and thanked his fans for making the video and confirms that the fouls are indeed what happened on court. A day later, on the 12th, other members of Reddit mailed the NBA’s commissioner Adam Silver to bring to light the Too Flagrant Not to Call video. As expected, a public relations individual within the NBA responded with a canned letter, infuriating the fans for not taking their criticisms seriously. One of the quotes from the letter states

“While some of the plays in the video you referenced involved hard contact, none was subsequently deemed a Flagrant Foul given the full circumstances, angles and comparables from past games.”

Considering that the first minute of the April 5th video, which now has over a million and a half view since April 16, provides examples of other flagrant fouls that were much less severe than half of the uncalled incidents for Lin, what exactly is a flagrant foul?

Many spectators have not called whether race has been a factor in this issue but it is difficult to try to divorce his race from him being a player in the NBA. As one of the few Asian Americans in the NBA, his popularity exploded during his tenure with the New York Knicks, dubbing the term Linsanity. Despite his ascension to fame and stints with the Houston Rockets and Los Angeles Lakers, some of the largest markets and some of the most frequent nationally televised games in the league, he was still stonewalled by the Hornet’s security guards for not knowing their newest point guard on the team.

Perhaps Jeremy Lin is not getting any foul calls because he does not look like an NBA player for his flaws of being Asian American and a Taiwanese descendent. Or perhaps he has not earned his status as a superstar that gives our favorites like Chris Paul, James Harden, and Lebron James, who all get the benefit of the doubt in foul calls. Considering that current MVP Stephen Curry has also shared his frustrations with the referee for not getting calls as often as other players, it is entirely possible that there are flaws with the NBA referees.

In one of Lin’s final games, after this flurry of news exploded and traditional sports news sources like ESPN picked up the story, he went off against the Celtics, scoring twenty-five points, grabbing seven rebounds, and five assists. Ten of his points were from the free-throw line. Perhaps the referees are finally listening to his fans and critics everywhere. Perhaps it was a fluke. We can only hope that he gets fair calls as the Hornets gear up against the Miama Heat in the first round of the playoff.